Flickto has Launched: Changing The Way Media Projects are Financed

It's time to change how media projects are financed. 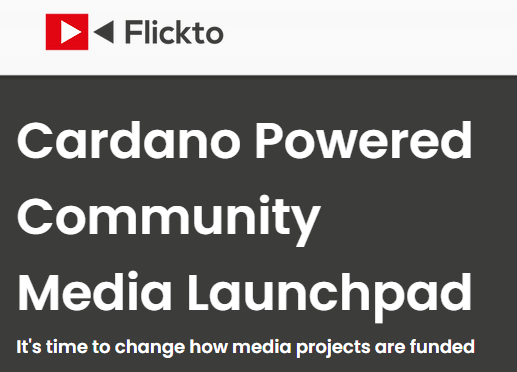 It's time to change how media projects are financed.

On Monday 1st November 2021 the Flickto project launched, which aims to change the face of media project financing for the better.

Powered by the Cardano Blockchain, Flickto seeks to give creatives the much-needed financial muscle to fund their next project.

Globally, there are millions of content creators who have ideas bubbling. Within these could be the big thing. The only factor holding them back is getting access to funding.

This is where Flickto comes in to revolutionise media financing. Flickto will invest in projects as voted for by the Flickto community.

Flickto will be leveraging the Cardano Initial Stake Pool Offering model to raise funds for the project itself and be a source of funding for media projects the Flickto community votes to launch. Until the FLICK token launches on an exchange, users will have the opportunity to stake Cardano ADA in one of the Flickto Cardano Stake Pools and earn FLICK tokens instead of ADA rewards.

The FLICK tokens held by users can be used to vote for their favourite media project seeking funding via the Flickto Portal. The project that wins each voting round will be funded.
Users who voted using their FLICK tokens will have ROI in the form of distribution royalties, which ensures the users that supported a project will be directly rewarded. To further reward Flickto platform users, those that vote for their favourite media project will be entered into NFT airdrops produced by the media projects as collectible project memorabilia, which have potential to serve as passive income when sold on the secondary NFT market.

Flickto will be a community where talented content creators get the recognition - and more importantly - the funding they deserve, from those who support and love their work. Flickto will bring creators closer to the consumer, with the aim of revolutionising the way the media industry is financed.

Find out more at www.flickto.io