BTC Flippening: What Are the Chances It Loses its #1 Spot?

BTC Flippening: What Are the Chances It Loses its #1 Spot?ATZCrypto - Latest Bitcoin, Ethereum, Crypto News &amp; Price Analysis Bitcoin has held the fort as the most valuable cryptocurrency for more than a decade before taking a turn... 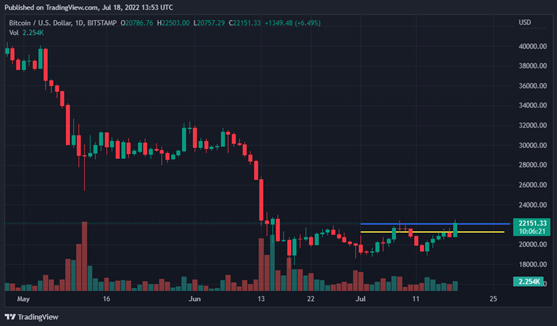 Bitcoin soared past $22,000 on Monday,July 18, recording the highest price in over a month. Cryptocurrency investors remain hopeful that the market infirmity and shakeout witnessed these past months is approaching its end.
The bullish sentiment comes as the stock market plummeted between Europe, Asia, and the United States stock futures. Because cryptocurrencies are also an asset class, they move in direct proportion to the stock market. BTC closely correlates with the equity trade market, which means a rise in stocks will often elevate sentiment within the crypto space.

Nonetheless, investors remain keen to observe whether the crypto massacre witnessed in the past few weeks could be over even as they continue mourning the carnage that saw billions of dollars wiped off the market and shake Bitcoin’s solidity right from its roots.

Led by Nikolaos Panigirtzoglou, strategists at Wall Street banking published the decline in production costs for Bitcoin. Per the report, BTC production cost was $24,000 in June 2022 before taking a nosedive to the prevailing $13,000 at the time of this writing. According to the strategists, this drop could have a long-term effect on the prices of digital tokens.

Beyond that, they also explained that the main cause of the drop in Bitcoin production cost is associated with the limited use of electricity, according to a data report from the Cambridge Bitcoin Electricity Consumption Index. JP Morgan confirmed this by adding that reduced electricity use can affect BTC prices. The opinion came as the bank considered the drastic price change that inspired a lot of uneasiness among Bitcoin miners. Most BTC miners sold off their digital assets, especially during the second quarter of 2022.

Barely one month ago,Bitcoin funding rates fell lower than the neutral level in June. The price of BTC at that time was higher than $30,000 before successive market crashes, and price dips took effect, sending the people’s crypto to lose over $10,000 in value alongside a struggling streak to hold above the previous cycle peak.

This happened following prolonged fluctuation between funding rates at and below neutral levels. The downtrend lasted longer than investors and crypto pundits expected as BTC prices struggled.

There is confidence among Ethereum believers to support the hypothesis that ETH will overtake BTC. The Ethereum Merge talks have catapulted ETH up by 39% over the past week, with programmers spending the past several years pushing towards the migration of their whole network off the high-energy-drawing proof-of-work (PoW) validation method to a more sustainable option, proof-of-stake (PoS).

The move is expected to reduce the amount of electricity spent per transaction and theoretically develop a smaller carbon footprint. The network’s leadership argues that with this Merge, blockchain users will enjoy faster settlement speeds for their transactions, together with better throughput courtesy of the network’s lower congestion and reduced overall fees.

Nonetheless, despite Ethereum Merge benefits, the network is the backbone of most of the NFT, play-to-earn, and DeFi traffic within the cryptocurrency ecosystem. The Ethereum blockchain is also home to most app developers actively developing new applications atop its platform to provide more use cases, applications, and user engagement. As such, investors and crypto players strive to dollar-cost average into ETH with hopes to benefit when the network matures.

Last week, Ethereum displayed a decent wave of recovery from the $1,000 zone against the USD, clearing the $1,120 and $1,150 resistance levels. The same week, Ethereum software developers announced that September 19 was their soft target date for the rolling out of the Ethereum Merge across its blockchain to every user.

The Ethereum Merge would be a programming project intended to pivot the blockchain from its prevailing transaction proof-of-work consensus process to a more sustainable proof-of-stake model. The program has proven to be much-anticipated news among crypto believers, as the sector has managed to reclaim a $1 trillion valuation across the market.

Market pullbacks in the cryptocurrency ecosystem have sparked debates on whether Ethereum can flip Bitcoin in market cap parameters. The current market downtrend has seen Bitcoin lose 68.2% of its value from the $69,000 ATH in November last year. On the other hand, Ethereum has lost 69.9% of the $4,800 ATH recorded in November 2021. Both coins are slowly recovering with market cap dominance of 40.056% and 16.731%, respectively.

Bitcoin’s Market capitalization accounted for up to 86.74% of the total crypto market cap in 2017, and while its unit price went higher, the market share of the people’s crypto has dropped by a significant margin to 40%. With the price of BTC and ETH at $22,137 and $1,477, respectively, investors now see the “Flippening” as an imaginable possibility.

The bitcoin price crash has caused the deposition of multiple high-profile companies within the crypto ecosystem, compelling some of them, like esteemed hedge fund Three Arrows Capital and Celsius cryptocurrency lender, to file for bankruptcy.

The effects of the market collapse have also been felt by other companies who responded to the contagion with de-staffing or employees absconding to look for greener pastures on their own. Some crypto-based companies went to sell off some of their assets to meet their expenses following the hefty pressure from the broader market.

With the price of bitcoin floating above $20,000 again after a long time, some positive sentiment has returned to the market, although the marketplace remains rather shaky because of the absence of significant support. As such, the bears can easily pull down the price.

The drop in BTC funding rates, therefore, remains a concern. In essence, funding rates should increase when the price of the concerned digital asset has decreased as much as BTC prices. However, the reverse is seen with Bitcoin, meaning that the amount of money coming into the ecosystem is insufficient.

The crypto market has surprised many over the weekend as the bulls finally lead the broader market. With an additional 5% in total market cap, the total crypto market cap now records $1 trillion for the first time since May. The correction has not been easy for Bitcoin, which has struggled a lot over the past few weeks despite its leading market capitalization. Nonetheless, BTC added over 4% in value within 24 hours.

Also, within the past 24 hours, proxies such as Grayscale Bitcoin Trust (OTG:GBTC) recorded +6.2%, and ProShares Bitcoin Strategy ETF (BITO) recorded +4.6% in value, climbs that catapulted them to catch a bid in pre-market trading.

Trading past the $22,000 resistance level (blue), chances are that Bitcoin will climb higher to breach the $23k psychological level and hopefully sustain a positive rally as the week unfolds. Even so, there is no evidence of a key catalyst explaining the sudden market recovery, even as most Altcoins and tokens continue to trade in the green.

Should the bulls maintain control, BTC could climb above the $23,200 resistance level before the day closes. The extension of this bullish performance would then see Bitcoin make a run for the 24K resistance level in a few days. It should be noted, however, that the bear market remains ongoing, and the leading crypto could still retrace some of the gains to drop below the $21,247 support level (yellow).

However, it should not be so hard for Bitcoin to defend the position above the $20,895 support level, at least for the short term.

According to Marcus Sotiriou, a positive reaction from the market to the wave of negative news is a potential sign that a local bottom has started. The negative news, in this case, refers to the fear that may have prompted the price rally. The GlobalBlock analyst believes that with cryptocurrencies recording what seems like a market recovery, the upswing may not be the ideal relief rally, as is the hope of crypto investors.

Reporting to clients, David Moreno, an analyst at CroptoCompare, opined that following the poor Q2 performance, a relief bounce would be premature, and the market will maintain its range-bound momentum for a few more months.

With the recent market development, miners’ profitability may increase, with a reduced craze to sell their assets. However, analysts think the Bitcoin price might prove resilient in the long run because of the reduced production price. Should this trend continue, investors who are already BTC hodlers may lose more.

What are the chances that Bitcoin will lose its #1 spot?

Flippening remains a controversial topic in cryptocurrency, with one side of the debate thinking it is inevitable while the other supporting that it is impossible. However, the lion’s market share is still cautiously observant to watch the two flagship cryptos slowly approach populous market adoption. Bitcoin has been the crypto for over a decade, but there have been concerns over the sustainability of its proof-of-work consensus.

With the Ethereum Merge happening later this year, the Ethereum community believes that ETH will overtake BTC. Ethereum converting to a POS consensus set to reduce energy consumption by 99% is a win for Ethereum because institutional investors will be driven toward sustainable options.