Bitcoin (BTC) is still in a corrective phase but Ether (ETH) has attracted strong buying, which pushed it to a new all-time high on Oct. 29. The successful Altair Beacon chain upgrade seems to have boosted sentiment and it... 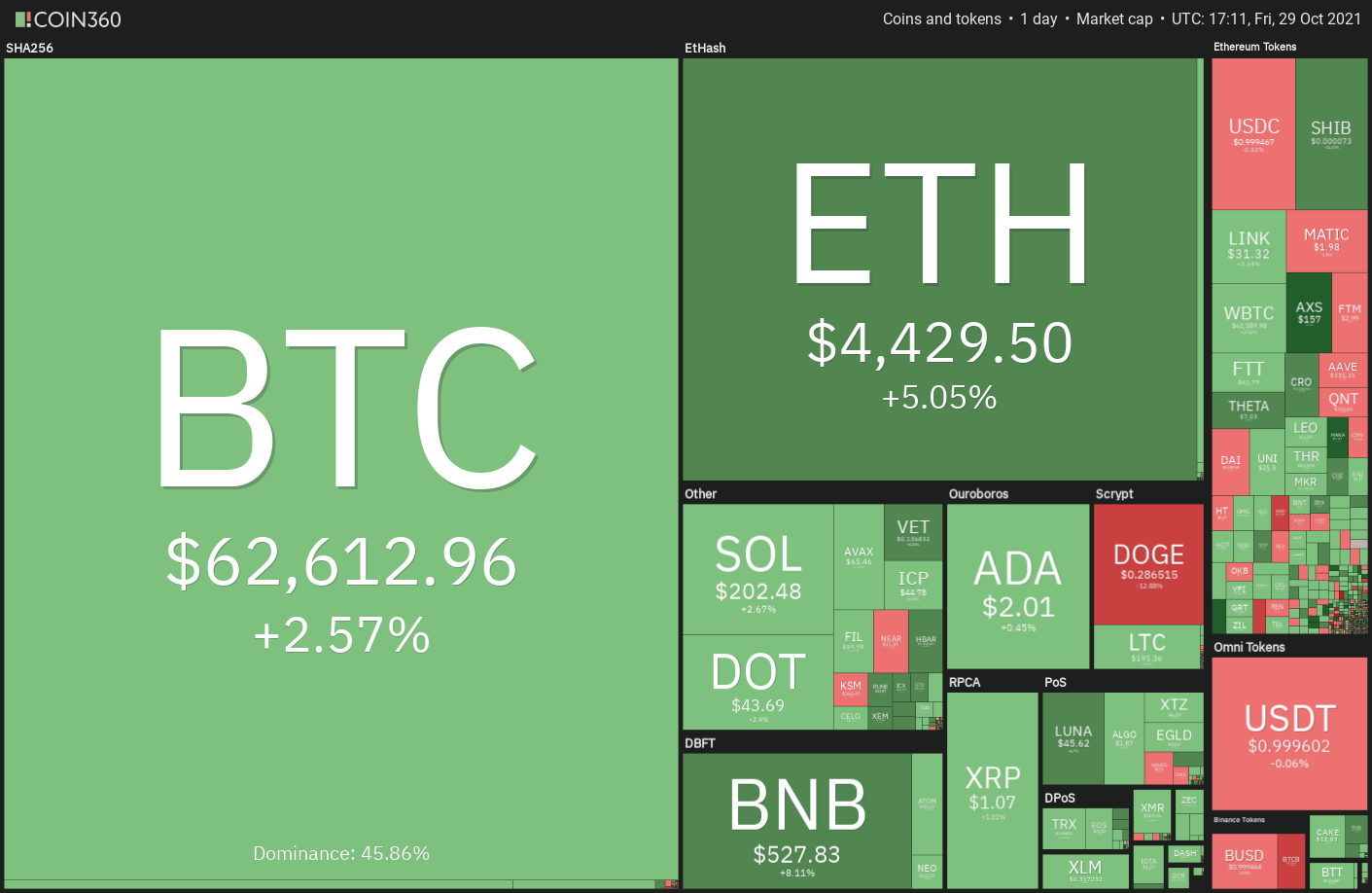 Bitcoin (BTC) is still in a corrective phase but Ether (ETH) has attracted strong buying, which pushed it to a new all-time high on Oct. 29. The successful Altair Beacon chain upgrade seems to have boosted sentiment and it also paves way for the merge with the Ethereum mainnet and the change to proof-of-stake.

Meanwhile, MicroStrategy has continued to add to its already impressive Bitcoin stack. The company’s Q3 report shows that it added 8,957 Bitcoin, taking its haul to 114,042 Bitcoi as of Sept. 30, purchased at an average price of $27,713.

The software firm’s appetite does not seem to have been satisfied yet and CEO Michael Saylor said the company “will continue to evaluate opportunities to raise additional capital to execute” its Bitcoin strategy.

The bullish trend in the crypto sector seems to have increased the demand for employees with experience in crypto or blockchain. A recent report by LinkedIn editor Devin Banerjee cited data from LinkedIn’s Economic Graph team, which showed that postings for jobs that included terms such as “blockchain” or “crypto” surged 615% in August, compared to a year earlier.

Could the sharp rally in Ether be the start of a new altseason? Let’s analyze the charts of the top-10 cryptocurrencies to find out.

Bitcoin dipped below the 20-day exponential moving average ($59,389) on Oct. 27 but the bears could not sustain the lower levels. The price quickly recovered and rose above the 20-day EMA on Oct. 28, suggesting strong buying on dips.

The price action of the past few days has formed a bullish flag pattern that will complete on a break and close above the resistance line. Such a move will indicate the resumption of the uptrend. The first resistance on the upside is the all-time high at $67,000.

If bulls clear this overhead hurdle, the BTC/USDT pair could start its northward march toward the pattern target at $89,476.12.

The rising moving averages and the relative strength index (RSI) in the positive zone indicate advantage to bulls. The bears will have to pull and sustain the price below the flag to invalidate the bullish setup. In that case, the pair could slide to $52,920.

Ether sharply rebounded off the 20-day EMA ($3,953) on Oct. 28, indicating that dip buyers used the recent pullback to accumulate. The biggest altcoin rose to a new all-time high today, signaling the resumption of the uptrend.

The upsloping 20-day EMA and the RSI in the positive territory indicate that bulls are in command. If buyers sustain the price above $4,375, the ETH/USDT pair could start its journey toward the pattern target at $4,657 and then rally to $5,000.

Contrary to this assumption, if the price fails to sustain above $4,375, it will suggest that demand dries up at higher levels. The pair could then consolidate between $4,375 and $3,888 for a few days. A break and close below this range will suggest the start of a deeper correction.

The bulls successfully defended the neckline of the inverse head and shoulders pattern on Oct. 27, which is a positive sign. This may have prompted buying from traders, propelling Binance Coin (BNB) above the overhead resistance at $518.90.

The 20-day EMA ($470) is sloping up and the RSI is in the positive zone, indicating that buyers are in control. If bulls sustain the price above $518.90, the BNB/USDT pair could resume its uptrend toward the pattern target at $554.

On the contrary, if the price fails to sustain above $518.90, it will suggest that traders are booking profits at higher levels. The pair could then drop to the neckline, which is an important support for the bulls to defend.

The bulls defended the strong support at $1.87 on Oct. 27 but the rebound lacks strength. This suggests that traders are hesitant to buy Cardano (ADA) at higher levels.

Both moving averages are sloping down and the RSI is in the negative zone, indicating that the path of least resistance is to the downside.

If the price turns down from the current level or from the 20-day EMA ($2.12), the bears will again try to break and close the ADA/USDT pair below the $1.87 support. Such a move could signal the start of a deeper correction to $1.58.

This negative view will invalidate if bulls push and sustain the price above the moving averages. The pair could then rally to $2.47.

Solana (SOL) bounced off the 20-day EMA ($180) on Oct. 27, indicating that the sentiment remains positive and traders are buying on dips. The bulls will now try to thrust the price above the overhead resistance zone at $216 to $218.93.

The rising 20-day EMA and the RSI in the positive zone suggest that bulls have the upper hand. A break and close above $218.93 will suggest the resumption of the uptrend and the SOL/USDT pair could rally to $239.83.

However, the bears are unlikely to throw in the towel easily. If the price turns down from the current level or the overhead resistance, the pair may consolidate between $171.47 and $218.93 for a few days. A break below $171.47 could signal the start of a deeper correction.

XRP slipped below the $1 support on Oct. 27 but the bears could not sustain the lower levels. This suggests that bulls are accumulating near the critical support. The buyers will now try to push and sustain the price above the downtrend line.

If they succeed, the XRP/USDT pair could rally to $1.24 where the bears are expected to mount a stiff resistance. If the price turns down from this level, the pair could remain range-bound for a few days.

The flat moving averages and the RSI just below the midpoint suggest a balance between supply and demand. This equilibrium will shift in favor of the bulls if the pair rises above $1.24. Conversely, a break below $1 could sink the pair to the strong support zone at $0.88 to $0.85.

Polkadot (DOT) bounced off the breakout level at $38.77 on Oct. 27, suggesting that the sentiment remains bullish and traders are buying on dips.

The bulls will now try to push the price above the overhead hurdle at $46.39 and retest the all-time high at $49.78. If this resistance is breached, the DOT/USDT pair could climb toward the next target objective at $53.90.

Contrary to this assumption, if the price turns down from the current level or the overhead resistance, the bears will try to pull the price below the 20-day EMA ($40.90). A break below this level could retest the critical support at $38.77. If this level cracks, the next stop could be the 50-day simple moving average ($35.68).

Dogecoin (DOGE) broke below the 50-day SMA ($0.23) on Oct. 27 but the long tail on the day’s candlestick suggests aggressive buying at lower levels. The bulls continued their purchase on Oct. 28, which may have caught a few aggressive bears off guard.

A combination of short-covering by the bears and bottom fishing by the bulls pushed the price above the $0.27 resistance on Oct. 28. However, the long wick on the day’s candlestick suggests that traders may have booked profits at higher levels.

The bulls and the bears are likely to witness a tough battle at $0.27. If bulls flip this level into support, the DOGE/USDT pair could again try to rally toward $0.35. A break and close above this level could clear the path for a possible move to $0.45.

The sharp rally of the past few days pushed the RSI to 91.66 on Oct. 27, resulting in a pullback on Oct. 28. The SHIB/USDT pair has formed an inside-day candlestick pattern today, indicating indecision among the bulls and the bears.

Although the uptrend remains intact, the pair could enter a few days of consolidation or correction to digest the gains of the past few days.

Terra protocol’s LUNA token bounced off the 50-day SMA ($38.69) on Oct. 27, indicating strong buying at lower levels. The price action of the past few days has resulted in the formation of a symmetrical triangle.

The bulls will now try to propel the price above the triangle. If they manage to do that, the LUNA/USDT pair could resume its uptrend. The bears may pose a stiff challenge at the all-time high at $49.54 but if this level is crossed, the pair may reach the pattern target at $62.59.

Contrary to this assumption, if the price turns down from the overhead resistance, it will suggest that bears continue to sell on rallies. The pair may then extend its stay inside the triangle for a few more days. 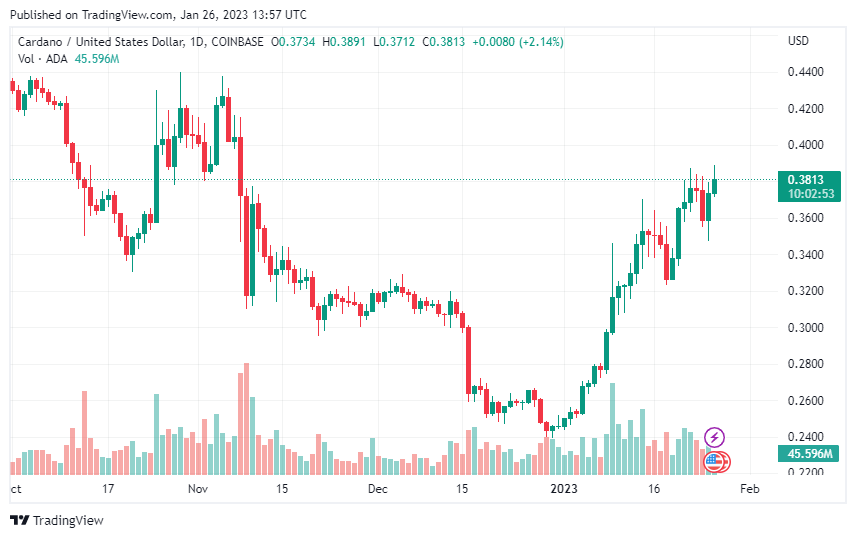