Engaging in any form or type of gaming can be an excellent way to unwind. However, in the current setup, it is incredibly hard for fantasy gaming fans to, in any way, contribute to universe developments or gameplay evolution. 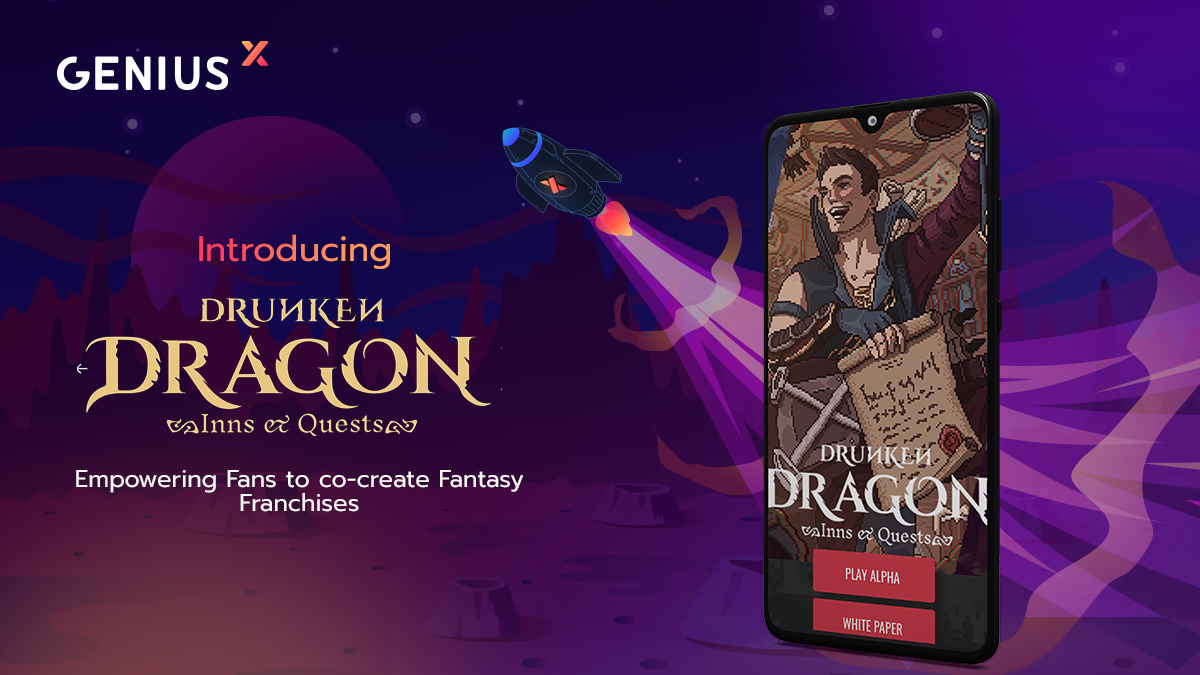 Engaging in any form or type of gaming can be an excellent way to unwind. However, in the current setup, it is incredibly hard for fantasy gaming fans to, in any way, contribute to universe developments or gameplay evolution.

For instance, in popular fantasy franchises like Warcraft, organizations that own Intellectual Property (IP) rights outrightly limit fan participation, leading to the development of unpopular products or disappointing lore evolution, causing frustrations. Besides, there is the propensity for IP holders to be profit-driven, leading to well-funded franchises but with disappointingly low-quality lores which are often inorganic and predictable.

Drunken Dragon Entertainment plans to align incentives between all stakeholders and mend fantasy fans’ exclusion from the development process by creating a new decentralized fantasy franchise where users can actively participate in governance. Notably, contributions to the franchise’s gameplay, lore, products, and merchandise in the Drunken Dragon Universe will be from independent game creators and studios distributed across the globe.

What is the Drunken Dragon Universe?

In this universe, a player will regularly receive quests from a guild of adventurers exploring the land. These quests are related to the environment of the player and would impact the game’s world. Typically, a quest can accommodate up to five players. However, in some instances, it can be for a single slot available. The more popular the Inn is among adventurers, the faster the gamer evolves, thereby receiving high rewarding quests.

All Inns will be represented as NFTs based on Cardano and graphics exist as next generation, high quality 2d isometric pixel art built on Unreal Engine inspired by the Octopath Traveler Game. Since they are unique and verifiable, a gamer can readily transfer them like they would a piece of prime real estate in the physical world. As the Inn owner, the player is supposed to complete as many quests as possible to attract more adventurers. This way, your NFT evolves faster and becomes more valuable.

The objective of the Drunken Dragon Entertainment is to build “the most epic fantasy universe” that brings people together and allows them to share meaningful experiences. For effective governance, treasury management, and quick product launching, creators leverage the Cardano blockchain for minting unique NFTs. Furthermore, through Cardano-based marketplaces like JPG Store, creators can trade these assets. This way, can draw more creators since there is a quick and practical alignment of incentives, fostering effective collaboration.

Drunken Dragon also always ensures their fantasy franchise upholds the highest quality through proper incentives while creating fitting opportunities for all creators and studios, regardless of geographical locations. Their approach to community, quality, and active creators’ collaboration aligns with their overall objective of ensuring that the gaming and entertainment industry is inclusive, built on the foundation of community, and conveniently interconnected.

It is a lofty goal that the team wants to realize through decentralized on-chain governance, well-designed tokenomics for incentivization, and the availability of powerful digital tools for real-time collaboration amongst creators and gaming studios.

The availability of these tools and decentralized governance where fans are part of the process, contributing, means that most franchises won’t be left behind. In some instances where IP holders call all the shots, franchises are left to disintegrate because of their unwillingness to further develop them leading to “dead” and inactive universes.

Drunken Dragon Entertainment is eliminating the need for fans to own huge portions of company shares for decision-making by creating the Autonomous Fantasy Franchise that inherits properties of the Decentralized Automated Organization (DAO).

It is autonomous where franchise development is decentralized to incentivize creators and studios while upholding the highest quality. Furthermore, because the blockchain enables effective treasury management, no single entity can dictate how the organization’s resources can be spent.

Drunken Dragon’s Autonomous Fantasy Franchise also evolves with their Decentralized Intellectual Property that identifies, at any instance, any idea or intangible asset belonging to the DAO. The Decentralized Intellectual Property governs all intellectual property rights generated from the autonomous organization and listed under the Franchise Policy Registry that authenticates all items or services under the Drunken Dragon Universe. This means that all creative and artistic ideas or services created are licensed and will be free to use by platform users, fostering collaboration. All licensed assets under the creative commons will be archived in the platform’s Digital Assets Vault.

Accordingly, all assets created in the Drunken Dragon Universe will be licensed under creative commons, where creators’ IP rights are protected, and assets can be freely moved across different digital spaces.

During the Eru Phase, the project’s development team (centralized at this stage) will propose the idea of the fantasy universe, including lore, story building, world development, and comics. However, the team will initiate decentralization by open-sourcing the technology for creating creative common assets. The team will also fund projects the community deems worth supporting at this stage from the treasury.

In the second stage, Estel, the primary focus will be on total decentralization through on-chain governance, treasury management, and tokenomics.

In the last stage, Mithrandir, the Drunken Dragon Universe would be fully decentralized and automated. Their primary focus will be scaling governance, tools, and models while accelerating creators’ and studios’ onboarding.

The Dragon Gold ($DG) governance token is central to the Drunken Dragon economy. It is used to distribute the stake of decentralized intellectual property and fantasy franchises, creator incentivization, and governance. The team is setting apart 47.50 percent of all DG to franchise contribution rewards.

Drunken Dragon creators use an extendable and composable governance system with two tiers for effective decentralization and diffusing control to users. $DG can also be delegated to Token Holder Representatives who participate in the platform’s governance on behalf of holders. Delegators receive rewards based on a revenue share formula in stablecoins and $DG from the treasury. This is possible because Drunken Dragon uses a structure used in the Cardano stake pool operator system.

Genius X fosters innovation on the Cardano network while empowering Web3 startups to build impactful and scalable blockchain-based companies that will have a massive global impact. We accelerate and scale incredible projects on Cardano and Web3 through our advisory, mentorship, and growth experiences.