The current Cardano price analysis is showing a relatively greater level of bullish momentum in the updates. There have been moments where bears have taken advantage and have been able to surpass the bulls. Yet, cryptocurrency is hinting at successful bullish endeavors in the future as prices jumped today to $0.480. This has been possible due to the presence of strong support at $0.459. Most of the altcoins and Bitcoin and Ethereum are all under correction today, at least at present. At the same time, Cardano is showing some promising bullish movement which is a hopeful indication for the buyers.

The one-day chart for Cardano price analysis indicates a surprising increase in the price levels today. The bulls have been able to break past the barrier created by the sellers at $0.464 and have a higher value of $0.480. This value is still ahead of the moving average (MA) of today, i.e., $0.467, as the majority trend observed during the past week has been bullish except for the crash observed on 19 August 2022. Overall the cryptocurrency has gained a value of 1.43 percent over the past week. At the same time, the coin showed good performance and gained a 3.33 percent value during the last 24 hours.

The gap between Bollinger bands is widening, which means that the current trend may intensify. The upper band has reached $0.589, representing the strongest resistance, whereas the lower band is touching the $0.426 value representing the strongest support for the coin. The Relative Strength Index (RSI) score is increasing at a faster pace and has reached an index of 45, which is appreciable as it is towards the buyers’ side and may increase further as the buying activity goes on.

The 4-hour Cardano price analysis indicates that cryptocurrency has gone through an uplift which has taken the price value to $0.481. The last hours have been highly profitable for the buyers as the bullish candlestick continues to grow, highlighting bullish momentum. Yet, in this hour, the price has gone through a major shift as it has crossed the upper limit of the volatility indicator, and most of the profit has been recorded during this time.

The Bollinger bands are showing support for the bullish trend as they have started to diverge to accommodate the uplifting price. The upper value has reached $0.474, and the lower value has reached $.450. The RSI score is also increasing sharply and is currently showing a reading of 60. Meanwhile, another important indicator which is the Bollinger band average is at a $0.462 value according to the 4-hours ADA price analysis.

From the one-day and four hours Cardano price analysis, it can be inferred that the trends have been greatly in favor of the bulls. The price has reached $0.481 today, as the buyers have contributed well enough to make this possible. The support levels have also been maintained at $0.459, which gave the bulls an edge to move forward easily. The resistance at $0.498 is almost near the actual price value and can be crossed soon as per the predictions. 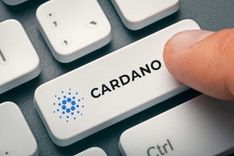