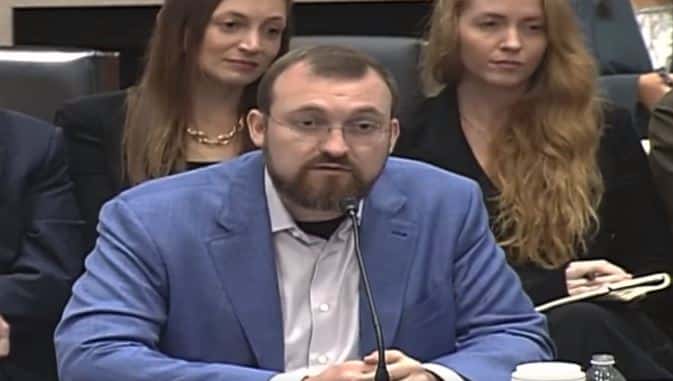 Hoskinson is still making moves to urge policymakers to create friendly regulations for the crypto industry.

The issue of cryptocurrency regulation has been one of the hottest topics in the industry. While crypto-related companies have consistently sought clearer regulation for the nascent industry, regulatory bodies like the Securities and Exchange Commission (SEC) and the Commodity Futures Trading Commission (CFTC) are yet to establish clearer regulatory policies for digital currencies.

In a bid to seek clearer regulation of the crypto space, Charles Hoskinson, the founder of the Cardano blockchain, recently testified at a hearing at the United States House Subcommittee on Commodity Exchanges, Energy, and Credit.

Question: How do you determine which of the 20,000 cryptos should be regulated? @IOHK_Charles’ Answer: pic.twitter.com/tCOeXrA5PX

“I am pleased to provide you with as much information as you need in order to ensure a fully informed and robust conversation on the future of digital asset regulation,” Hoskinson was quoted as saying.

He further said that It’s impossible to regulate all cryptos by one person or entity. Regulation can become algorithmic and what is good about Crypto is that its transactions carry metadata and identity on the transactions themselves. So we can have Some form of self-certification by Self-Regulatory Organization (SRO) and no government involvement until an anomaly is detected by the algorithm. So that self-certification method can be monitored by The Commodity Futures Trading Commission or SEC as they monitor other financial sectors.

Difficulty in Regulating All Existing Cryptos

Hoskinson acknowledged that it would be impossible for regulators to provide clearer regulation for each cryptocurrency asset due to the enormous amount of projects in existence, which has over the years exceeded 20,000.

However, he suggested that U.S. regulators should focus on tools that can make crypto regulation easier.

The Cardano exec noted that regulators and policymakers can choose to sit back while stating the things they care about regarding regulating the industry and these things will be integrated into a system like establishing a Self-Regulatory Organization (SRO).

He added that the existing government agencies tasked with overseeing the cryptocurrency industry should only get involved with crypto regulation when an anomaly is detected by the algorithm incorporated into the system.

Hoskinson said the United States authorities could also establish a public-private partnership in the cryptocurrency sector, just as it did during the early days of the internet.

“The United States embraced the public-private partnership that allowed the internet to flourish and for the United States to play and maintain a primary role in internet technology. Similarly, it will take many different agencies working together with the private sector to ensure the American blockchain industry flourishes and reaches its full potential,” the Cardano boss was quoted as saying.

Hoskinson has been focused on pushing for favorable regulations in the cryptocurrency industry. Earlier this month, the Cardano boss said he visited Washington D.C. to lobby regulators into establishing friendly policies for the nascent industry.

Meanwhile, aside from commenting on suitable ways to regulate the United States’ crypto environment, Hoskinson also highlighted some of the potentials of the blockchain and how Cardano is using the technology to proffer real-world solutions.