This is the second issue of our developer’s update blog. As promised in the previous issue today we’ll bring the latest development news from the devs room 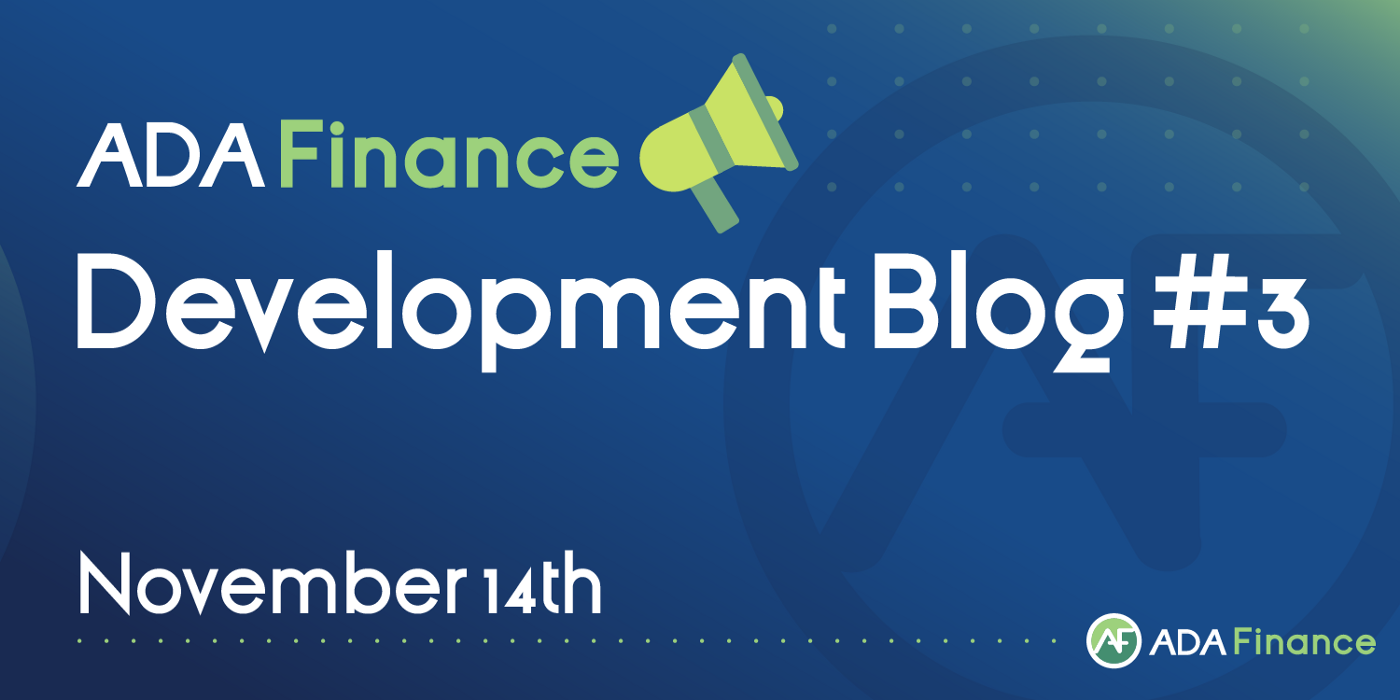 This is the second issue of our developer’s update blog. As promised in the previous issue today we’ll bring the latest development news from the devs room. As introduced before, our developers are divided into four major teams: Haskell, Solidity, DevOps and Frontend UI&UX.

Haskell development — Cardano
The Haskell team has been working non-stop on the development of the smart contracts responsible for ADA Finance features. During the past week the Haskell team has split its efforts between two major tasks: 1) Architecture research and integration and; 2) Finalization of the staking smart contract code v1 for imminent publication on GitHub (as the ADA Finance CEO, Christof Waton informed our growing telegram community during an AMA on 11/11/2021).

With the release of the beta version of the Plutus Application Backend (PAB) on 11/05/2021 by IOHK, developer teams across the globe are joining the race to implement full dApps. Our dev team is actively researching the release and has already started developing the integration with Yoroi wallet, which will be critical for interfacing with the many ADAFi ecosystem services. This last piece of the puzzle allows us to define the final architecture and speed up the process of building our DeFi suite.

Once deployed to the blockchain, a smart contract cannot be modified, this encourages developers to implement strong security mechanisms before deployment to avoid potential future exploitation. Cardano’s protocol, in particular, includes formal verification which requires a few extra steps compared to other blockchains such as Ethereum (which rely on external services to provide verification). This feature adds a layer of complexity and forces Haskell developers to provide formal specifications for both the contract and its execution environment to ultimately create a formally verified smart contract. Given that we are on the cusp of code publication, we want to be extra careful to ensure the code is protected against potential attacks and properly indexed. The publication of the staking contract v1 is not only an original achievement for ADA Finance but it will also serve as a guide for other projects struggling to get their development rolling. ADA Finance is committed to creating safe solutions and sharing them with the broader Cardano development community.

Of course, we are also developing the v2 code for the staking contract but we’ll talk about that in a future instalment of the development blog series.

Solidity Team — Avalanche
In the meantime, the solidity team worked tirelessly to get their version of the staking contract up and running. Solidity, being tried and tested for a number of years in many blockchain networks (e.g.Ethereum, BSC and Avalanche), has a much larger community compared to Haskell. Hence, development in Avalanche proceeds much faster and smoother compared to Cardano. The first version of the staking smart contracts has already been developed and we are in the process of stress testing it. Soon, this code will be made public, audited, and deployed, first on the testnet and shortly after, on the mainnet. By being a cross-dual-chain and, more specifically, by adopting Avalanche as our second blockchain, ADA Finance remains committed to hitting the milestones in our roadmap on time.

Frontend Team
Finally, the Frontend team is focussing on developing JS solutions for navigation and authorization flow. This code evolves towards a unified public-facing platform API. Furthermore, the team has, in tandem with the other teams (Haskell and Solidity), started developing the integration with Cardano wallets such as Yoroi and Nami.

Conclusion
With the public sale coming up in December, we are on track delivering the 1st platform version and staking, on Avalanche, by TGE. To give everyone the opportunity to build their referral network, we are looking to bring the referral program in a centralized environment at the start, to enhance the ADAFI Token utility.

We are looking forward to the AIBC Awards on Tuesday 16th November, where ADA Finance is nominated for the ‘Best DeFi Project of the Year’ award.
In the event we bring home the award, we will release our Haskell (Cardano) staking smart contract code in a public repository, once again taking the lead within the Cardano Ecosystem!