Cardano (CRYPTO:ADA) has now become one of the fastest-growing cryptocurrencies in the crypto world. In fact, Cardano is now ranked sixth in terms of largest cryptocurrencies by market capitalization.   Indeed, the fact that Cardano is up there with...

Cardano (CRYPTO:ADA) has now become one of the fastest-growing cryptocurrencies in the crypto world. In fact, Cardano is now ranked sixth in terms of largest cryptocurrencies by market capitalization.

Indeed, the fact that Cardano is up there with sought-after cryptocurrencies like Bitcoin (CRYPTO:BTC) and Ethereum (CRYPTO:ETH) is a big deal. This digital currency, whose ticker symbol gets its name from English mathematician Ada Lovelace, aims to be more sustainable and scalable than its mega-cap crypto peers. Cardano has been quite successful in becoming a leading network for crypto enthusiasts of late.

This success has been reflected in an astronomical increase of 2,000% in ADA’s value over the past year.  Let’s dive into why investors may want to continue to buy into Cardano at a $67 billion market cap. 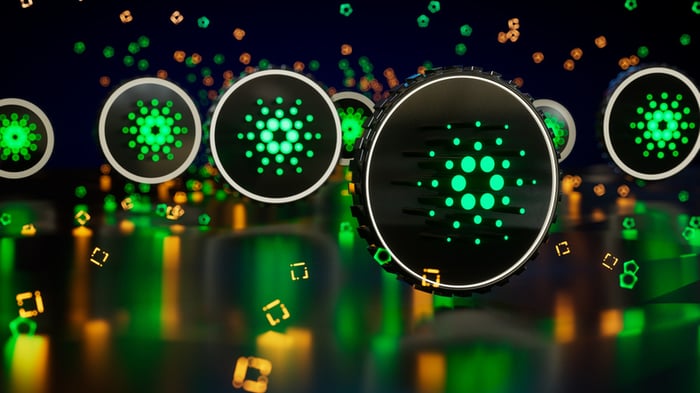 Faster than its competitors

One of the biggest problems for most cryptocurrencies is scalability. The largest crypto tokens such as Bitcoin and Ethereum can process around 4.6 and 15-20 transactions per second (TPS), respectively.

However, in terms of speed, Cardano is right up there with the best. This network was tested in 2017, showing the ability to handle 257 transactions per second.  That’s heads and shoulders above most of its peers.

Transaction speed is a metric that’s being watched closer by investors. That’s because micropayments and microtipping will become possible on the Cardano network, once its Hydra protocol is fully implemented. This protocol has taken five years to develop, however experts believe this could allow Cardano to process as many as 1,000 transactions per second. Thus, the scalability argument with this cryptocurrency network remains strong.

To put this level of speed in context, the Visa network processes approximately 1,700 transactions per second.  Cardano could, at least in theory, give some major incumbents a run for their money in terms of facilitating transactions swiftly and effectively, at extremely low cost.

Given the fact that Ethereum and Cardano share a founder, it’s perhaps unsurprising to see Cardano rise to prominence so quickly. After all, the ability to utilize smart contracts on a given network is game-changing. Smart contracts are digital contracts between two parties, which automatically execute when certain conditions are met. These are the building blocks of the decentralized finance (DeFi) and decentralized application (dApp) movements.

Cardano’s versatility in providing a real innovative and disruptive threat to sectors such as finance, healthcare, and law is notable.

However, another key factor investors note as a reason to own Cardano is the network’s proof-of-stake protocol.  Unlike Bitcoin and other proof-of-work miners, proof of stake mining allows investors in Cardano to stake their tokens to validate the blockchain. This requires much less computing power than the traditional PoW model and is appreciated by environmentally conscious investors.

Another side effect of proof-of-stake validation protocols is these allow for relatively low transaction fees and improved transaction times, along with less energy usage. The fact that Cardano was one of the early adopters in this validation model has propelled this cryptocurrency up the market cap list rather quickly. Other cryptocurrencies are expected to follow Cardano’s lead over time.

Unlike some other cryptocurrencies whose supplies aren’t capped at a certain limit, Cardano has a fixed supply. This cryptocurrency has followed Bitcoin in this regard. Unlike Bitcoin, which capped its total token supply at 21 million, Cardano chose an arbitrary value of 45 billion for its supply cap. Currently, there are approximately 31 billion ADA tokens in circulation today.

Accordingly, investors in ADA know that approximately 70% of all ADA tokens that will ever exist already exist today. By limiting supply, investors have a theoretical floor underneath the price of ADA, assuming supply and demand fundamentals remain intact.

As with other cryptocurrencies, supply and demand are important factors in Cardano’s valuation. Right now, this remains a highly sought-after cryptocurrency. However, risks related to how capital continues to flow into the cryptocurrency market, as well as the amount of leverage used, remain. Investors ought to be wary of these risks.

Certainly, there are a number of great reasons to consider Cardano right now. However, even with these positives, there are risks that investors need to consider.

Cardano is still a relatively young cryptocurrency. The entire crypto world is still growing fast — and remains in its infancy, for that matter. However, the extent to which Cardano succeeds at remaining a top cryptocurrency for investors depends on how competitive the Cardano network is over time. In this regard, Cardano seems like a strong bet.

That said, the crypto market remains highly volatile. Investors buying any cryptocurrency ought to be aware of this fact and size positions accordingly. Despite Cardano’s appeal, there’s significant risk with investing in any asset class that has shown this level of volatility over an extended period of time.

This article represents the opinion of the writer, who may disagree with the “official” recommendation position of a Motley Fool premium advisory service. We’re motley! Questioning an investing thesis — even one of our own — helps us all think critically about investing and make decisions that help us become smarter, happier, and richer.