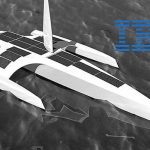 Powered by IBM’s AI, the ship was designed and built by non-profit maritime research organization Promare.

With no human captain or onboard crew, IBM‘s Mayflower Autonomous Ship (MAS) uses Artificial intelligence (AI) and the energy from the sun to travel further and reveal more about the ocean. Working in tandem with scientists and other autonomous vessels, MAS provides a flexible and cost-effective platform for deepening understanding of critical issues such as climate change, ocean plastic pollution, and marine mammal conservation. In parallel, the development of marine autonomous systems promises to transform ocean-related industries such as shipping, oil, and gas, telecommunications, security and defense, fishing, and aquaculture.

Powered by IBM’s AI, the ship was designed and built by the non-profit maritime research organization Promare. Mayflower AI’s main purpose is to reach places where no robot has gone before, and collect oodles of data from our oceans.

Per an IBM white paper:

Just as IBM has been instrumental in the development of the Mayflower’s AI Captain, it has also helped global enterprises solve many critical operational challenges. When used in conjunction with our DecisionsFirst

IBM engineered the crewless ship with three layers of technology: sensory inputs, real-time machine learning and analytics, and a decision engine. IBM experts used petabytes of data to train machine learning models and wrote rules-based decisioning for the decision engine, enabling the ship to react to an often-treacherous ocean environment — with zero human intervention. It adheres to maritime law while making crucial split-second decisions. It reroutes itself around harsh weather environments. It collects and analyzes massive amounts of ocean data. And it does it all, 24/7.

By extending the ship’s groundbreaking intelligent automation, operational decision-making, edge computing and AI-powered remote monitoring technologies across industries, we can pave the way for the next generation of innovation, efficiency, safety, and cost-savings in your business.

How does Mayflower AI work?

As mentioned by IBM, Mayflower Autonomous Ship (MAS) is equipped with three layers of technology — sensory inputs, real-time machine learning and analytics, and a decision engine. Engineers used petabytes of data to train the machine learning model. The decision engine is suited to ruled-based decision making, allowing the ship to navigate the ocean with no human intervention. MAS reroutes itself around harsh weather conditions and collects and analyses ocean data round the clock. Although MAS makes crucial decisions in split seconds, it adheres to all maritime laws.

Equipped with solar-powered vessels, MAS remarkably cuts down on the time and costs of hiring scientists. The autonomous ship travels to collect data from the remotest and most dangerous realms of the ocean. Scientists and researchers stationed on land download the live data and images synced to the cloud. MAS is armed with an electronic tongue called the HyperTaste to detect data, including ocean chemistry or whale songs.

The autonomous ship also has AI-powered sensors used to analyse the data collected to help scientists derive insights at a much higher speed.

The post IBM’s Mayflower AI can be Used in Business to Execute Operations appeared first on .


GADA Finance is launching its Initial Stake Pool Offering (ISPO) Starting on June 29, 2022 Being the first permissionless and community-governed launchpad on Cardano, we intend to raise funds through a public ISPO which will enhance the Cardano ecosystem. CLICK HERE!
READ THE ORIGINAL ARTICLE ON >> Analyticsinsight

How Altcoins Can Reduce Bitcoin’s Grip on the Crypto Markets

Cardano price analysis: ADA tests $0.51 support with potential to rise up to $0.67