ADA Bullish with Small Pullbacks at $0.71

Keeping up with all the cryptocurrency news and updates is not an easy task, but we are up to the challenge! This way we can help our readers to keep track of changes in these fast growing currencies. Just like our site, lambo2btc.com is willing to face this challenge and on their site, they compile the features, key elements, and recent news involving bitcoin casino sites and which are the best to try!

ADA Bullish with Small Pullbacks at $0.71

ADA has been working its appetite to grow valiantly. As discussed previously as well, ADA (Cardano) has been doing fairly well since early this year and has risen 44% during the first week of February 2021. 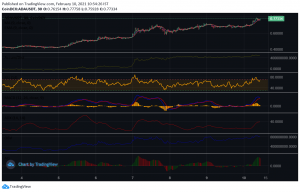 Days Ahead for ADA

The A/D and OBV indicators are rising. As the price is also rising, the market is bullish. Whale accumulations are more than distributions. Since buying volumes are high, the price is likely to rise further.

The ADX line is forming frequent peaks and troughs indicating that the market is volatile. There are equal buying and selling pressures. Currently, the ADX indicator is falling implying that the bullish trend is weakening. It is pointing towards an intermittent price pullback.

The AO oscillator is negative too. But the ‘sell’ signals are not very strong. However, a price pullback looks imminent.

The MACD and signal lines have just turned negative after treading in the positive territory in the last few hours. Hence, the market momentum is turning bearish. However, since both the lines are very close to the zero line and may turn positive again, these bearish signals may result in just a temporary price pullback.

The RSI indicator is at 55%. It fell up to 36% a few minutes back but rose again. This implies buying pressures are slowly overtaking selling pressures. Hence, we can expect the price to rise further.

The SMA and EMA lines are below the price line. So the market looks healthy and the price may rise further.

Currently, the price is above the first Fibonacci pivot resistance level of $0.76. The bullish trend will continue tomorrow also if the price manages to breach the second and third Fibonacci pivot points of $0.80 and $0.85 by the end of the day.

To sum up, the ADA price trend looks bullish. But, some intermittent price pullbacks will occur as a part of the price correction process.

Ankita is reading geek by birth, she loves to read and write about finance and now cryptocurrencies and blockchain since 2017. A Bitcoin enthusiast ever since, she likes to understand businesses and how they affect everything else. Ankita contributes on our news bulletin with the latest happening in blockchain, crypto and ICO market specifically.

FLICKTO 2ND IDO ROUND - hosted on ADAX – IS NOW LIVE! The Flickto team has partnered with ADAX to host our first IDO round. This is your opportunity to invest in Flickto and obtain FLICK tokens at their lowest possible price. Learn more www.flickto.io
Read the article in Coinfomania

Inside the Cardano ecosystem with Charles Hoskinson